The 3rd collaboration includes new cover songs from Hatsune Miku Series – Butterfly on your Right Shoulder (covered by Roselia), Shinkai Shoujo (covered by Morfonica), BRING IT ON (covered by RAISE A SUILEN), as well as playable MVs of the above collaboration songs. Besides, a special time-limited login campaign is also available during the collaboration where various rewards such as exclusive costumes and Stars can be received.

1. Commemorative Collaboration Login Campaign
In celebration of the 3rd collaboration with Hatsune Miku, players will receive the limited Collaboration Live Costumes of the cover bands, a total of Stars x500, Hatsune Miku Collaboration Drink, various types of Shards (L) etc., by logging into the game for 10 days during the campaign. Also, Tone Crystal x70 will be sent to all players immediately who log in after the collaboration starts. 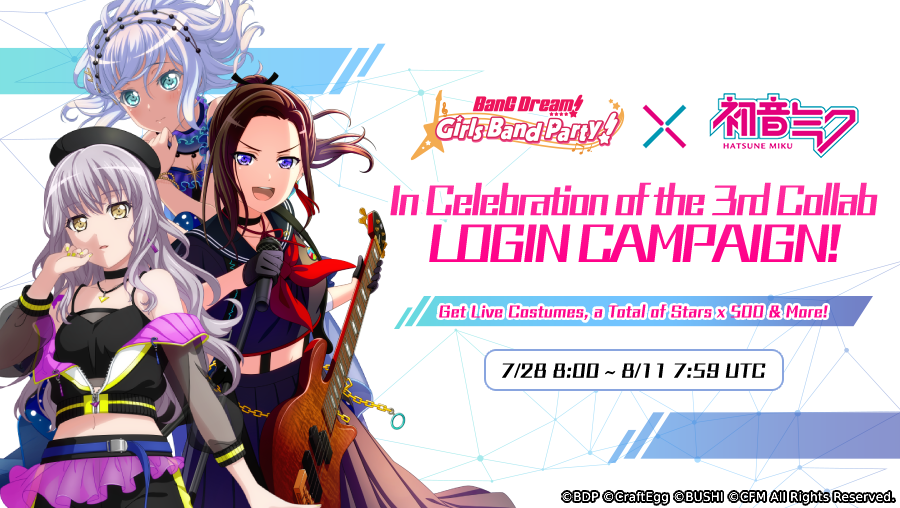 Log in on Day 1 during the Collab Login Campaign to get the Collaboration Live Costumes of the Roselia members! 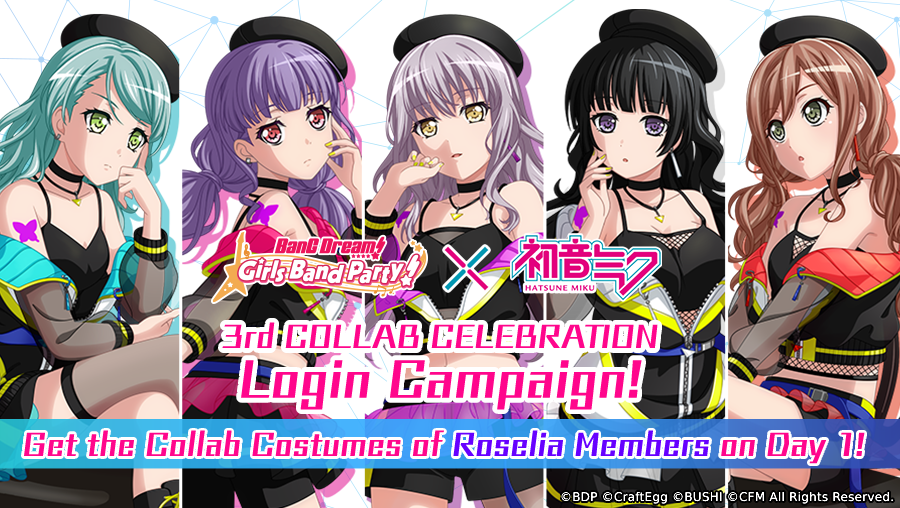 Log in on Day 2 during the Collab Login Campaign to get the Collaboration Live Costumes of the Morfonica members! 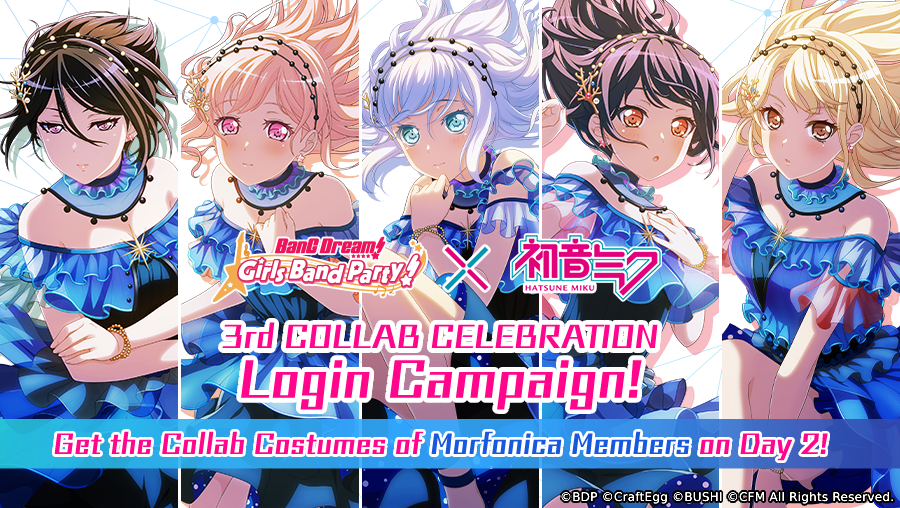 Log in on Day 3 during the Collab Login Campaign to get the Collaboration Live Costumes of the RAISE A SUILEN members! 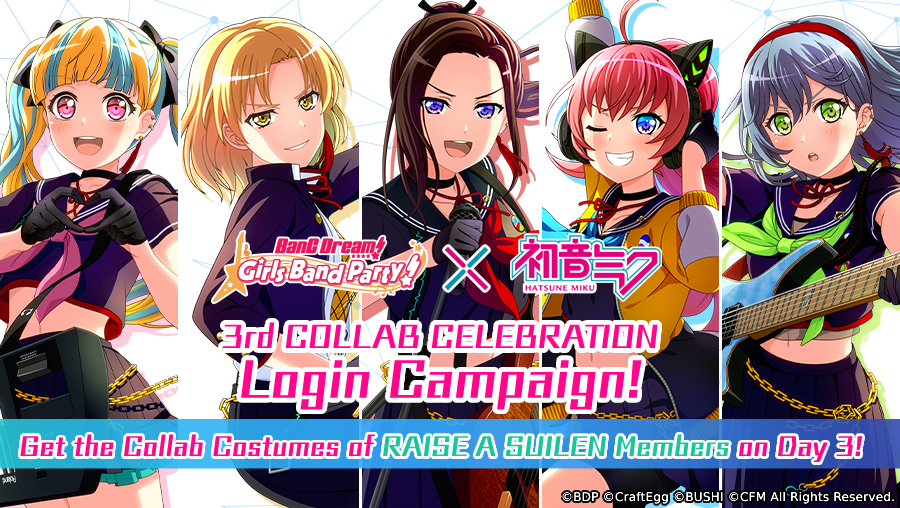 ▼Butterfly on your Right Shoulder (released on July 28th) 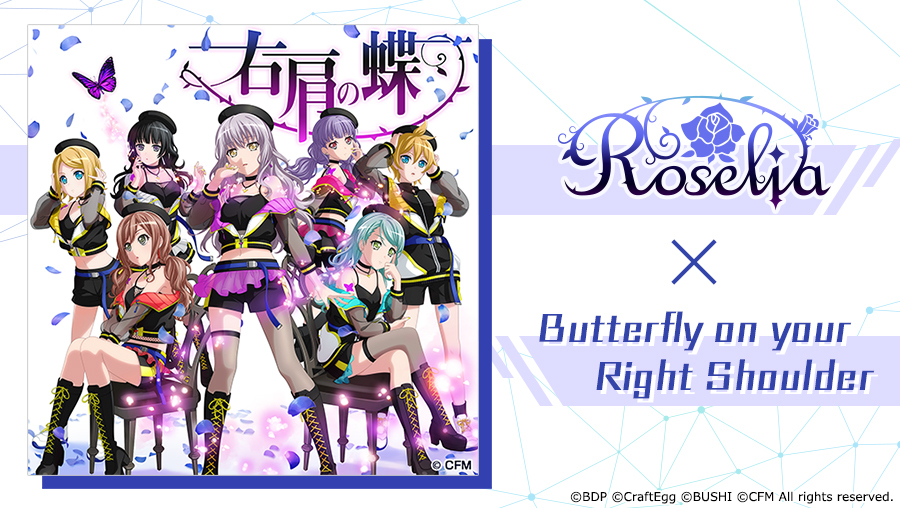 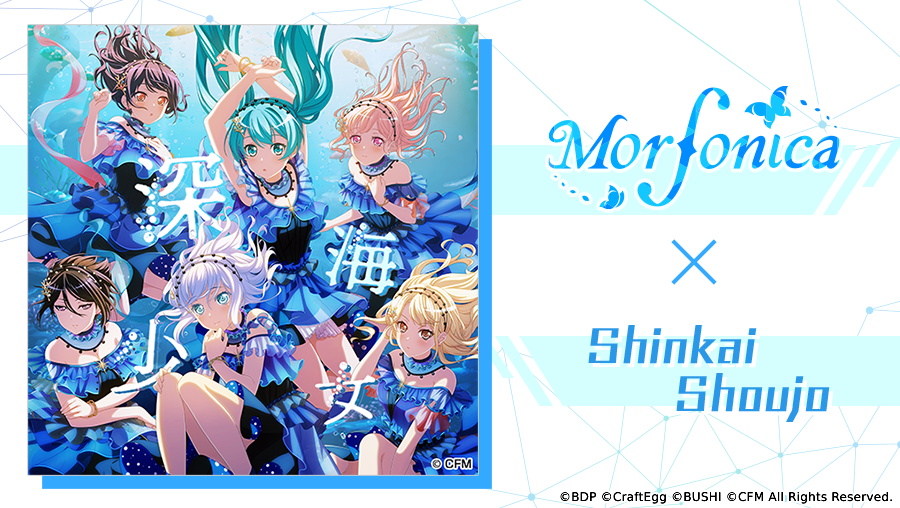 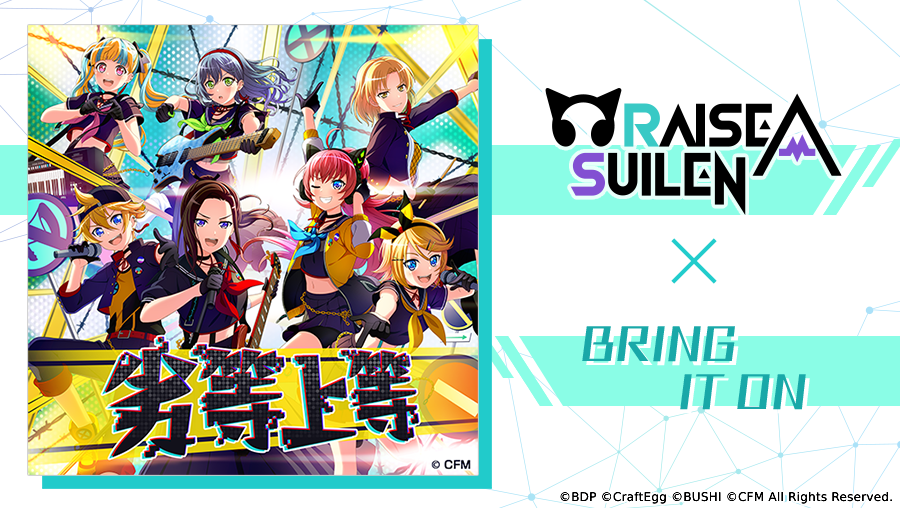 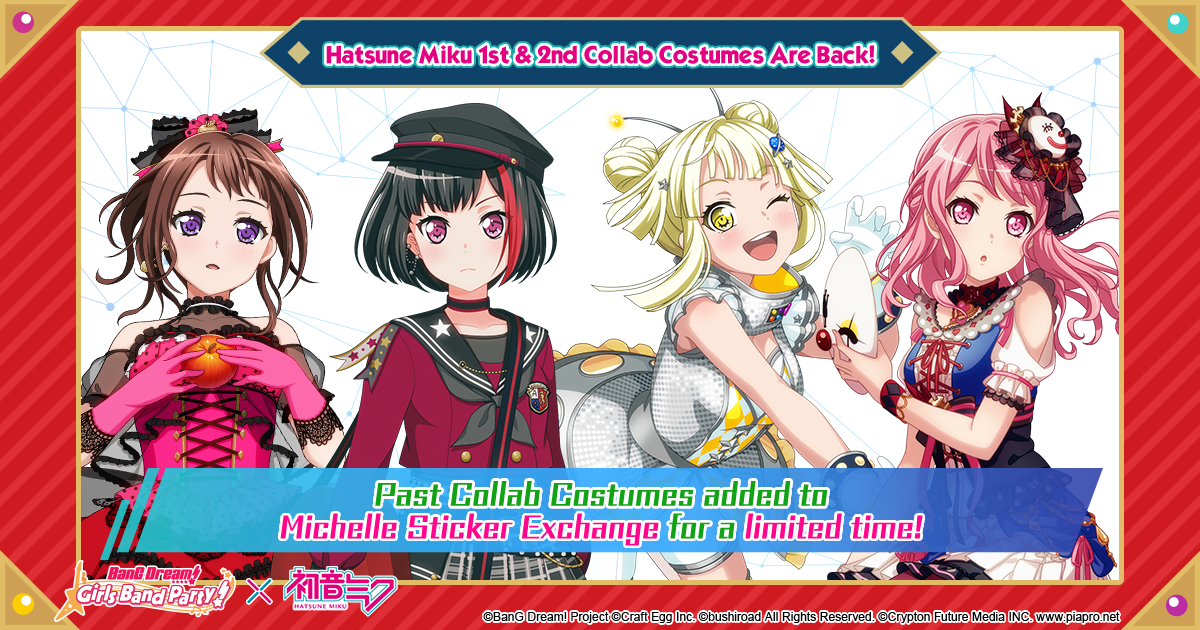 About “BanG Dream!”
“BanG Dream!” is a next generation girls band project that links animated characters with real life performances. It is a media franchise that includes Anime, Games and Live Performances. Voice actresses from “Poppinʼ Party”, “Roselia” and “RAISE A SUILEN” appearing in the Anime series formed the live bands and are actively performing live performances. In March 2020, a fourth live band “Morfonica” was formed and announced.

*The English version, which has just celebrated its 3rd anniversary in April 2021, is available worldwide except for Japan, China, South Korea, Hong Kong, Taiwan, and Macau.
DOWNLOAD THE GAME HERE VIA iOS / Android: https://app.adjust.com/m7t6ts

What is “Hatsune Miku”?
https://piapro.net

Hatsune Miku is music software developed by Crypton Future Media, INC., and it enables anyone to make the computer sing by entering lyrics and melodies. As a massive number of users created music using the software and posted their works on the Internet, Hatsune Miku quickly evolved into a cultural phenomenon. Moreover, Hatsune Miku has gained much attention as a character, involved in many fields such as merchandising and live performance as a virtual singer. Now her popularity has spread across the globe.

※Kagamine Rin, Kagamine Len, Megurine Luka, MEIKO and KAITO are also virtual singers developed by Crypton Future Media, INC.
—
Bushiroad International Pte. Ltd. was established in Singapore on November 12, 2011 in order to expand and handle the international market for Bushiroad card games. Since then, Bushiroad International is also involved in the localization of mobile games such as BanG Dream! Girls Band Party! and Tap Hina Logic.