Bushiroad announces further plans for its trading card games in 2022

More units from the game’s past return in the V Clan Collection series of products. 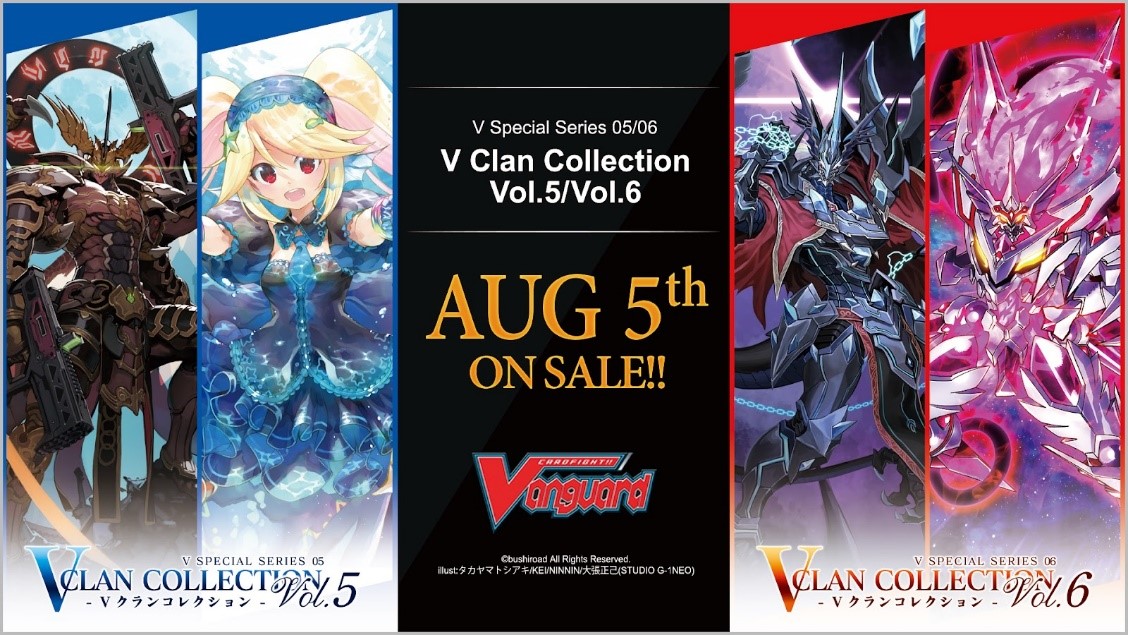 Similar to previous V Clan Collection products, V Clan Collection Vol.5 & Vol.6 will contain support
for many different deck archetypes and feature iconic units from the franchise’s past reimagined for
the present state of the game.
Additionally, a new type of product was introduced during the stream that is aimed at new players
trying to learn Cardfight!! Vanguard. 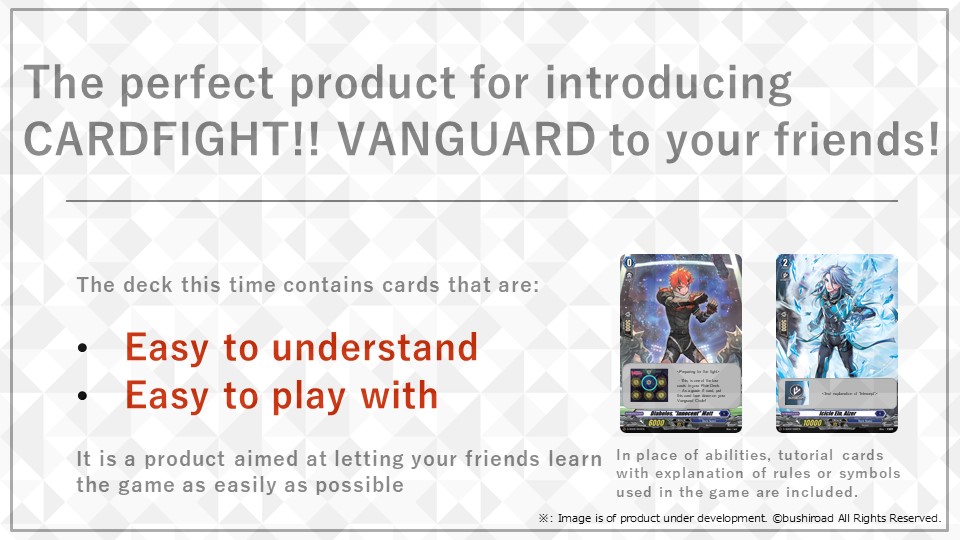 Cards from this product have instructions and explanations on how to play the game in place of their
regular card text. This will help new players learn and get used to the game more easily. 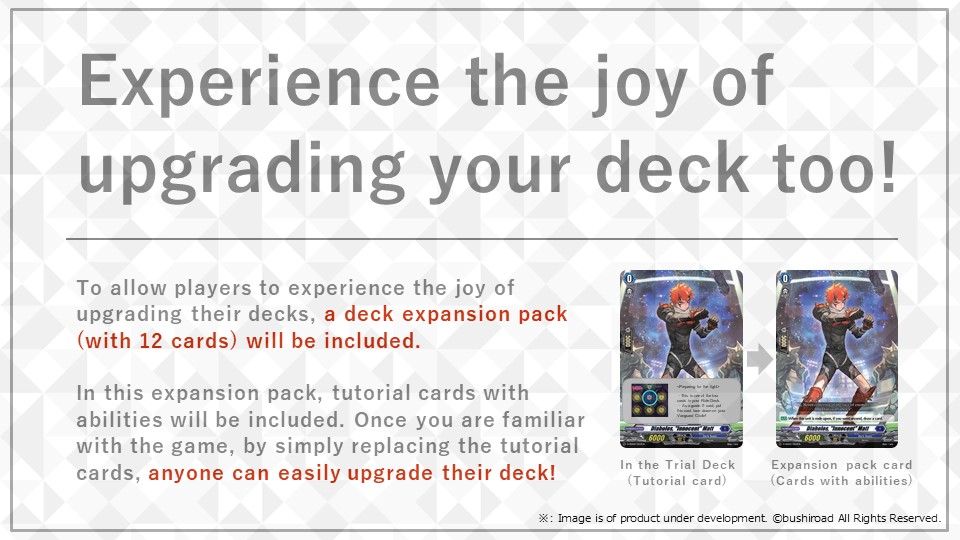 Once they’ve mastered the basics of the game, new players can then swap out the tutorial cards
with the actual cards in the deck expansion pack included with the product for regular play.
Bushiroad’s flagship card game Cardfight!! Vanguard recently celebrated its 10th anniversary. The TV
anime series has aired since January 2011, and over 2 billion cards have been sold through
multimedia expansion worldwide. Cardfight!! Vanguard has since been adapted into comics, stage
performances, and various events and collaborations with external partners.

As tournament stores are cornerstones of Bushiroad TCG communities, Tournament Store Assist PR
Packs will be distributed to them to help them further promote Bushiroad TCGs. 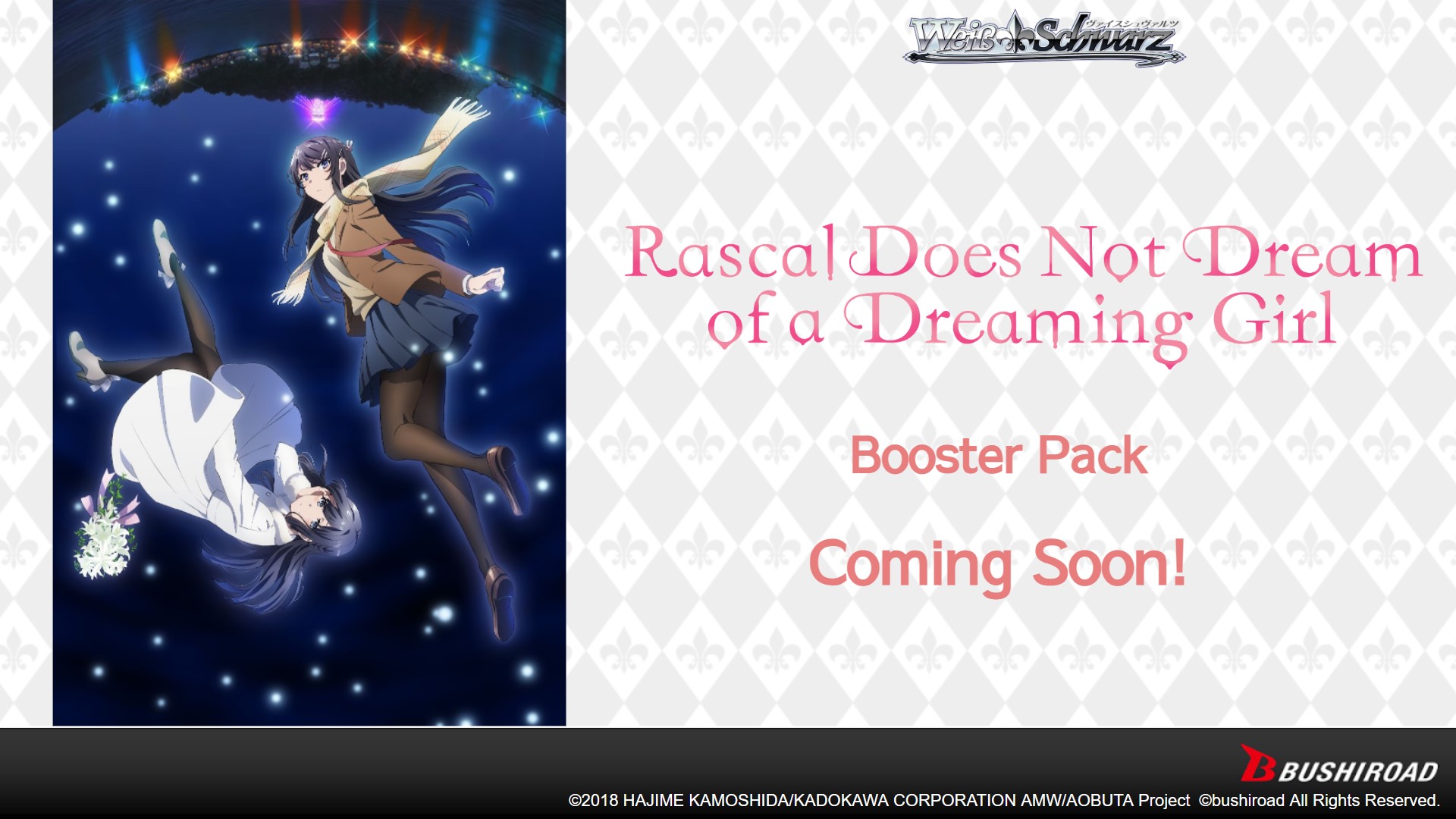 More information on this product will be announced soon. 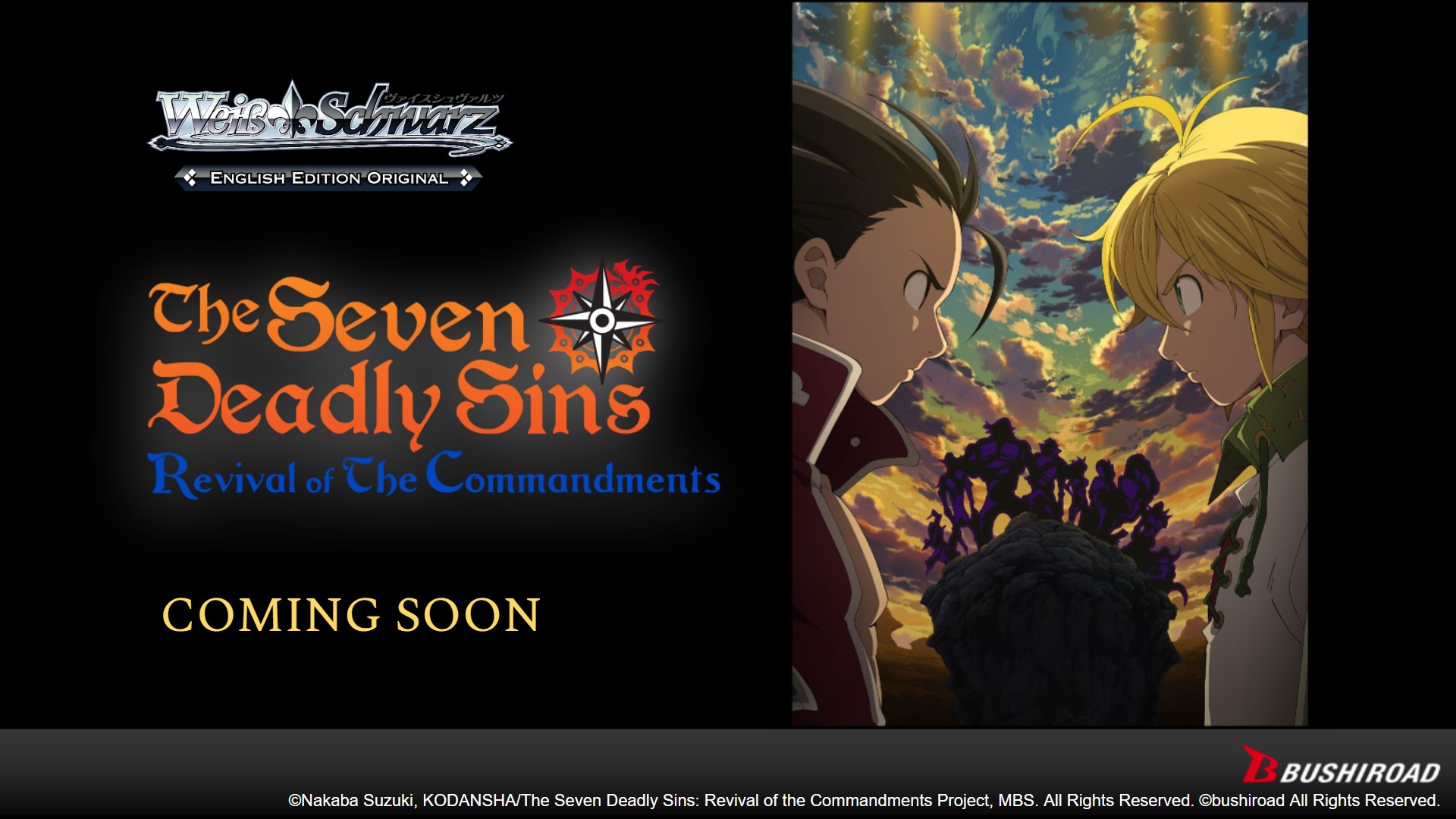 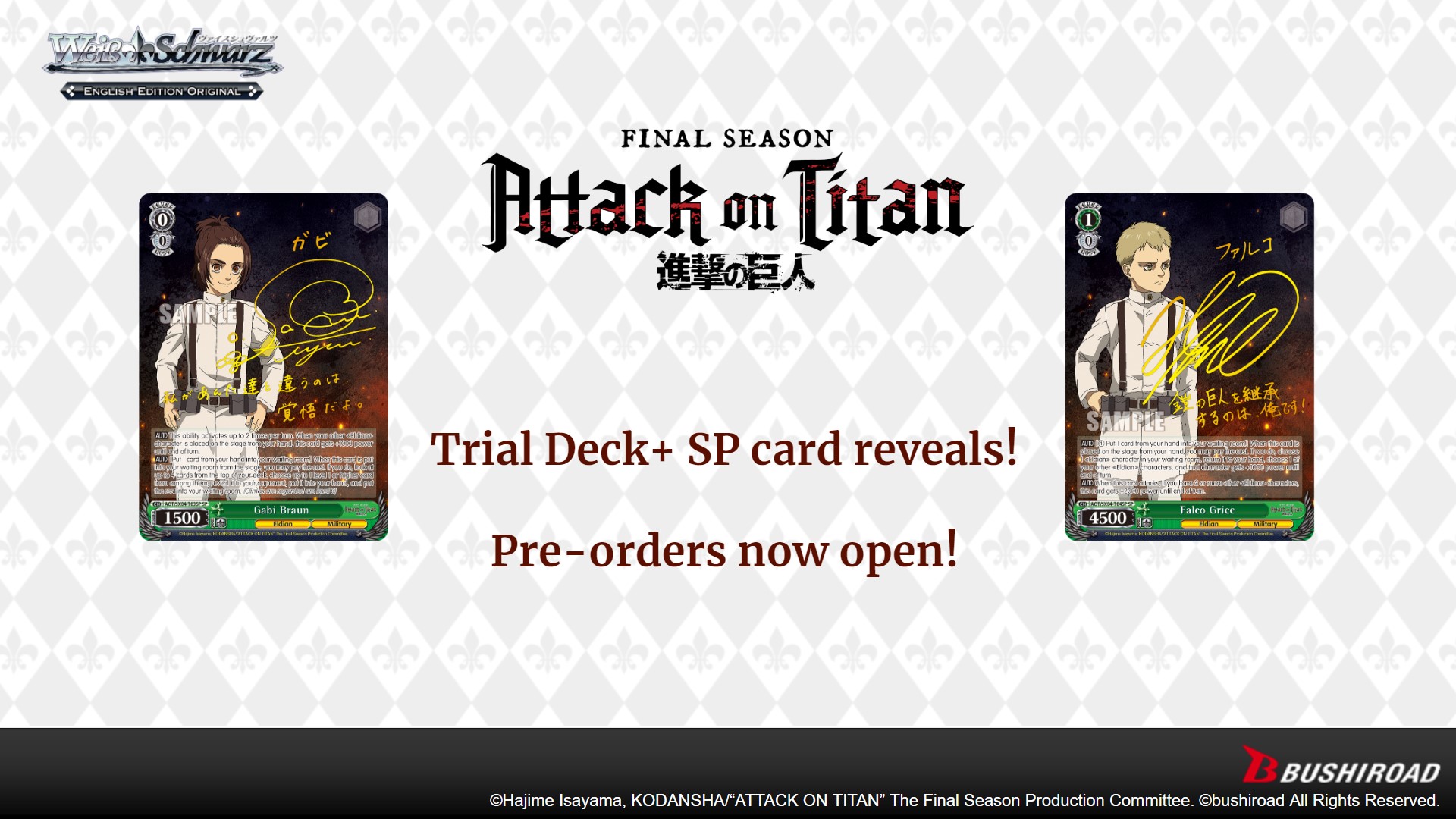 These cards will be available in Trial Deck+ product for Attack on Titan: Final Season. Trial Deck+
products contain pre-constructed decks that can be used for play off-the-shelf.
Weiß Schwarz allows players to relive their favorite animations and games through an exciting, fastpaced card game. Popular titles such as Date a Live, That Time I Got Reincarnated as a Slime, and
Re:ZERO -Starting Life in Another World- have graced the game, along with many others. 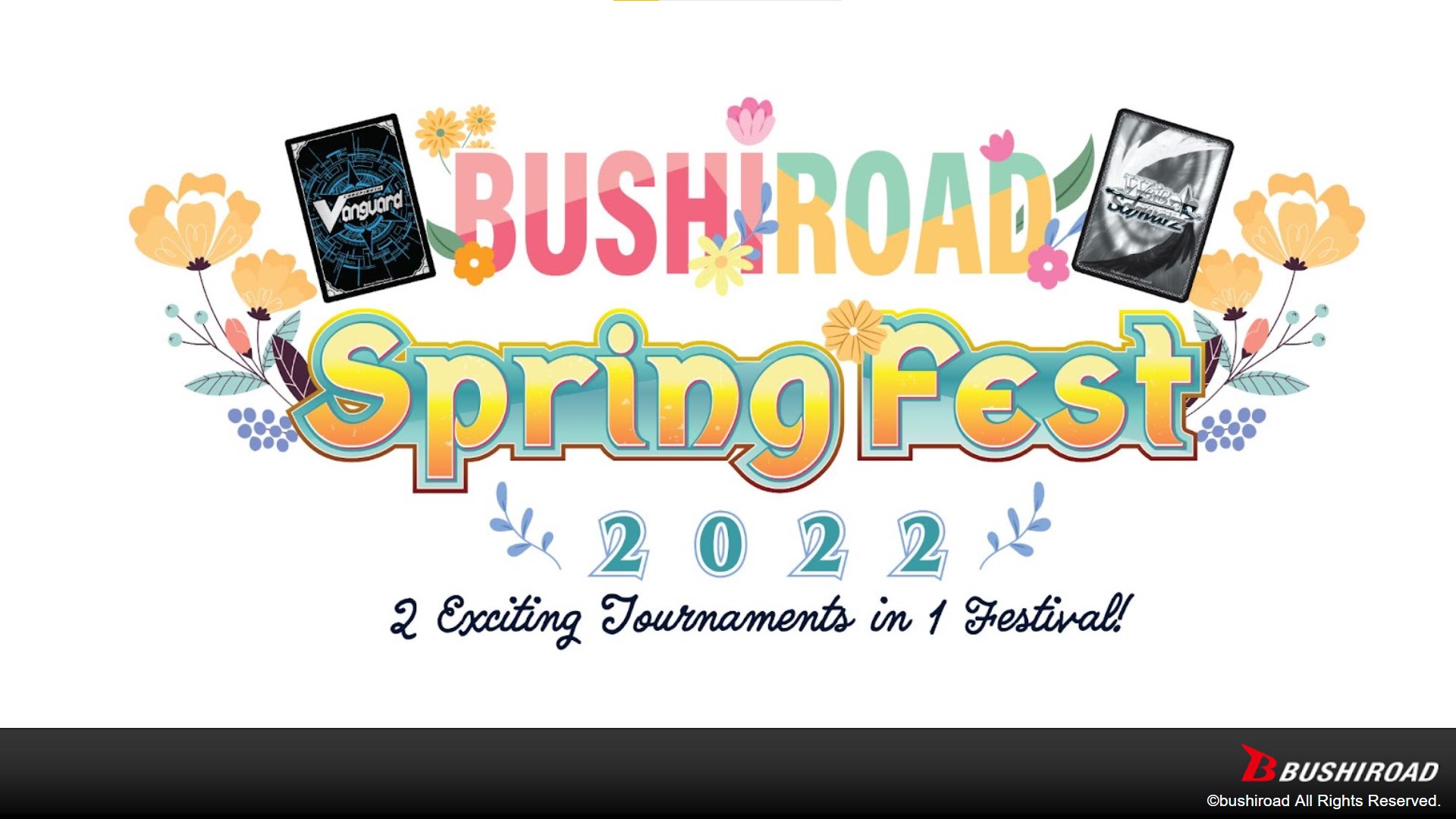 The Bushiroad Spring Fest is an annual tournament series held in the first half of the year featuring
all English edition Bushiroad TCG titles and formats. The event has been confirmed in 20 locations
around the world, and will run from April to July this year. As with previous events, many exclusive
prizes and cards are available for this event, including BSF2020 prize cards which could not be given
out that year due to the pandemic.
——
Bushiroad Inc. is an entertainment company known for its popular trading card games such as
Cardfight!! Vanguard and Weiß Schwarz, its mobile games such as Vanguard ZERO and BanG Dream!
Girls Band Party!, as well as other entertainment contents that cater to a worldwide audience.
Bushiroad Inc. consists of 12 sub-entities: Bushiroad International Pte Ltd., Bushiroad USA Inc.,
Bushiroad Creative, Bushiroad Media, Bushiroad Move (HiBiKi), Bushiroad Music, Bushiroad Music
Publishing, Bushiroad Fight (STARDOM), New Japan Pro-Wrestling Co., Ltd., New Japan Pro-Wrestling
of America, Inc., Hikosen Theater Company and Sopratico Co. Ltd.