The Organizer may randomly choose players to conduct a camera check. The chosen player will have to move the camera to show his/her surroundings. This is to ensure that there are no other parties or cards in the area to prevent cheating.

Card supplies (sleeves, playmats, etc.) that infringe any copyrights are not allowed.
Custom made supplies that do not infringe any copyrights are allowed.
However, certain supplies may still be declined by the organizer, if it does not meet the standards stated in the floor regulation.
Officially licensed products may also be rejected if they are deemed inappropriate, i.e. partial nudity, symbols etc.

You may check if your card supplies are licensed by checking the Copyright text.
Licensed products will contain the Copyright symbol and Company’s name.
Do a Google Search on the Copyright information to check if the name is from a Media/Game company where the art is originally from. 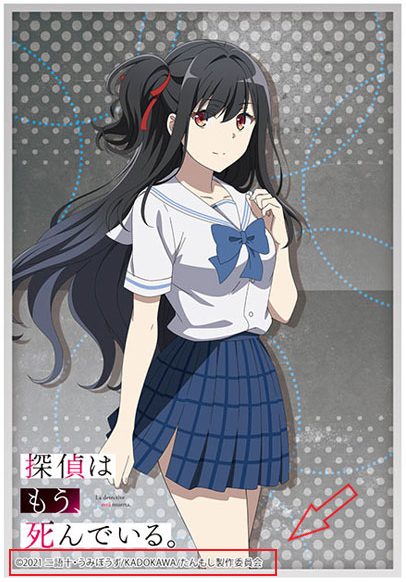 Copyright text included “KADOKAWA”, which is the Producer for the anime “The Detective Is Already Dead” (where the character art is originally from).

Should they not have other sleeves to change into, they are allowed to continue playing until the top 8/16, where they will be dropped from the tournament and the 9th Place or 17th Place will move up in rankings.

How to call a Judge

1. Inform your opponent that you’re calling a judge. The game is paused.
2. Leave your cards in your hand on the table as well, all cards must be visible
3. Call a judge by pinging “@Judge Table Number x” (Judge Roles will be available in the Discord Servers)
4. Only proceed after the Judge has entered the voice channel

As cutting your opponent’s deck is not possible through webcam tournaments, after shuffle, players must cut their deck into 3 equal piles and label the piles as 1, 2 and 3.
Your opponent will get to choose the order in which the piles will be stacked.

Players are strongly recommended to record their own matches as video proof for ruling disputes.
However, you are not allowed to stream your matches.
Please note that if you participate, there may be a chance that your match is recorded by your opponent for tournament purposes and may be uploaded.
Your match may also be streamed on our official channels.

If you are unsure of the number of warnings you have received, you may always check with the judge.

Preparation Time (after pairings and before start of the round)

Organisers/Judges will announce the time remaining (5 or 10 minutes) before the end of the round.
Each player is responsible for their own timekeeping should they miss out on the notifications and pings from the judges. 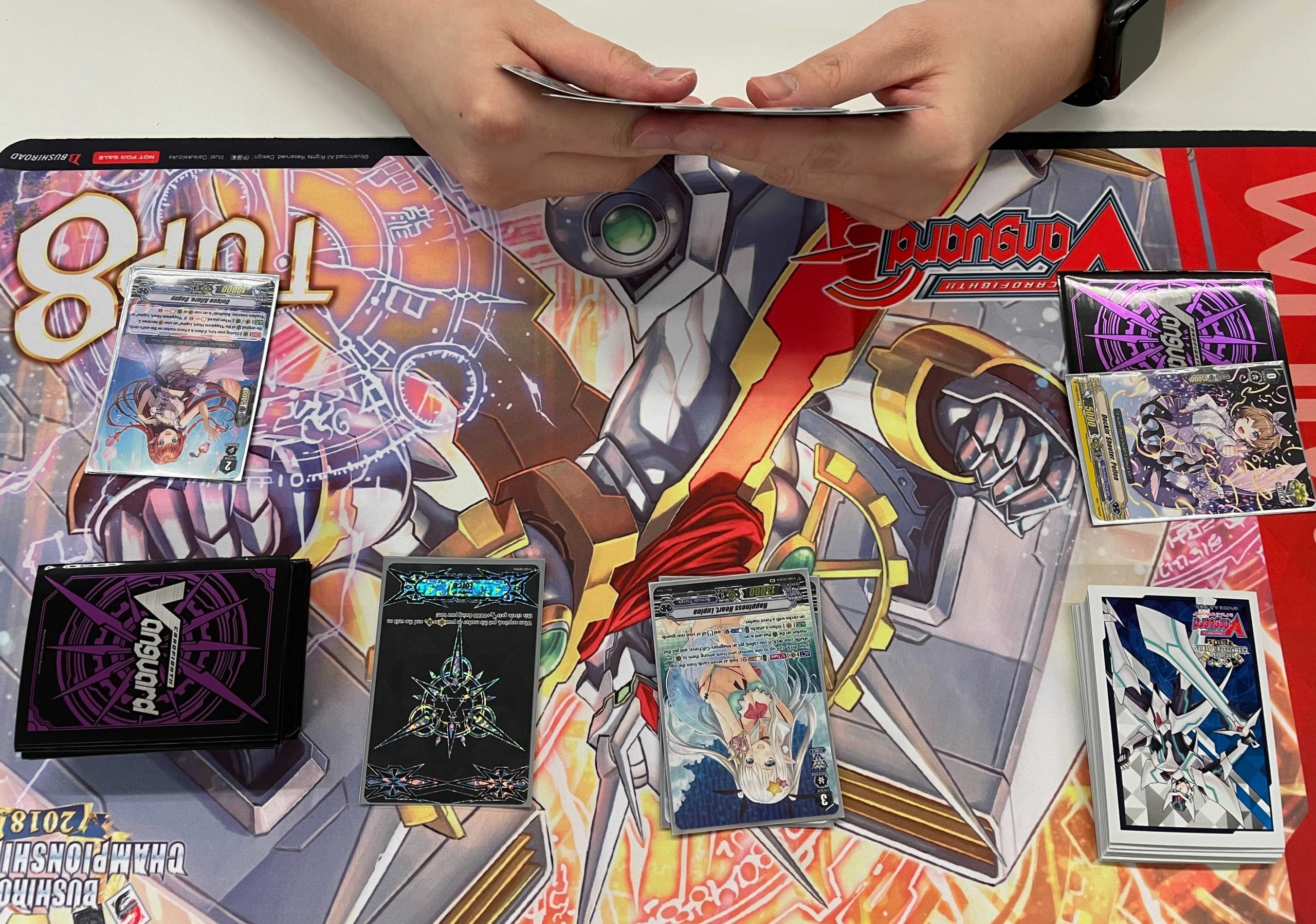 Should you face any video feed issues and want to reconnect, call a judge first before attempting to reconnect.
If the player connects, then disconnects, they have 5 minutes to reconnect before they are awarded a game loss. Players who reconnect after 1 minute will have to shuffle the deck. (For cards that rearranged the player deck, it will be a case by case basis by the Judge)

Language
Only English edition cards may be used.
Cards
Cards from new expansions are legal to use from the expansion’s official release date.

Cards from expansions which are available after Sneak Preview / Pre-sale events are not allowed for use in the tournaments until the expansions are officially released.

*Kindly note that D-BT03 will not be allowed for use for Cardfight!! Vanguard Premium Format on 4-5 December.

Sleeving
Fighters are required to use opaque card sleeves so that the back of cards cannot be easily distinguished.

Sleeves used for all cards must be of the same design unless otherwise stated. Clear outer sleeves may be used. However, the maximum number of layers allowed is 2. In the event the player chooses to use outer sleeves where one side is clear/gloss and the other is matte/textured, the matte/textured side should cover the front of the card (where the card art and text is found), and the glossy side should cover the back of the card.

* Please note that the above ruling only applies to the BRO2021 online events, and does not affect in-person events.

Important Notes
Players have 10 minutes to finish the 3 extra turns. After 10 minutes or end of the third turn, whichever comes first, the winner is decided in the following manner:

In the top-cut, after 3 extra turns, the game will be decided by sudden death.
(Refer to Bushiroad TCG Advanced Floor regulation for more details)
For best of 3 formats, if the score is 1-1 after the extra turns procedure, both players will receive a loss.